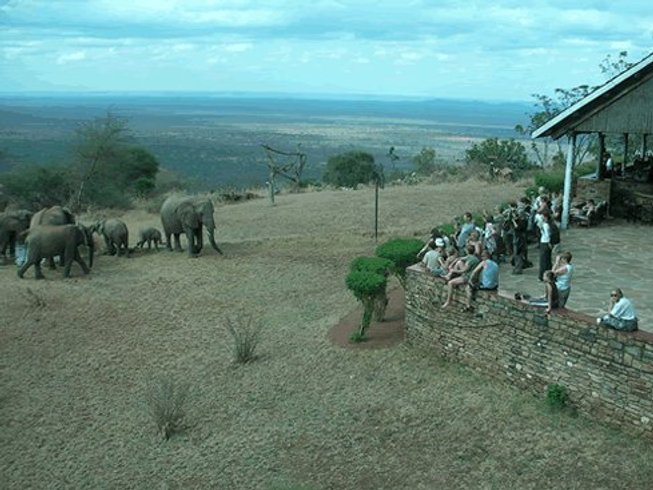 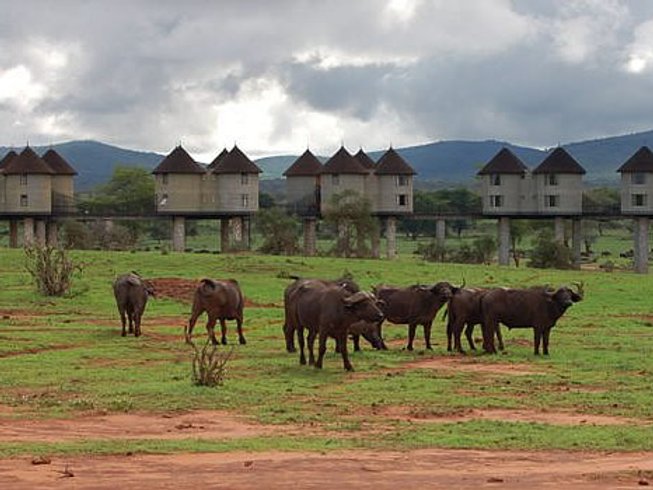 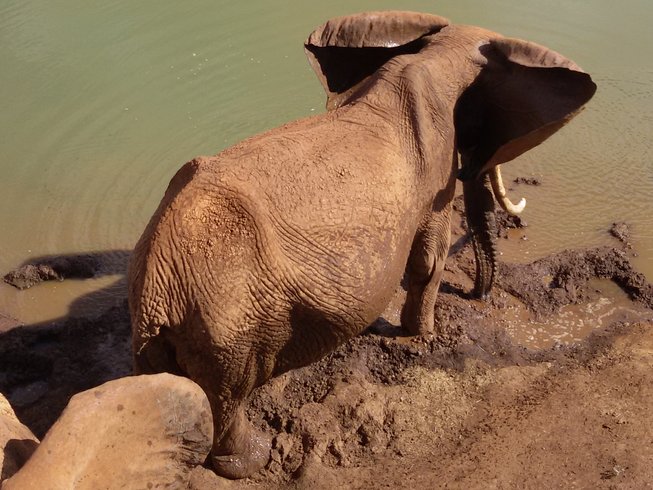 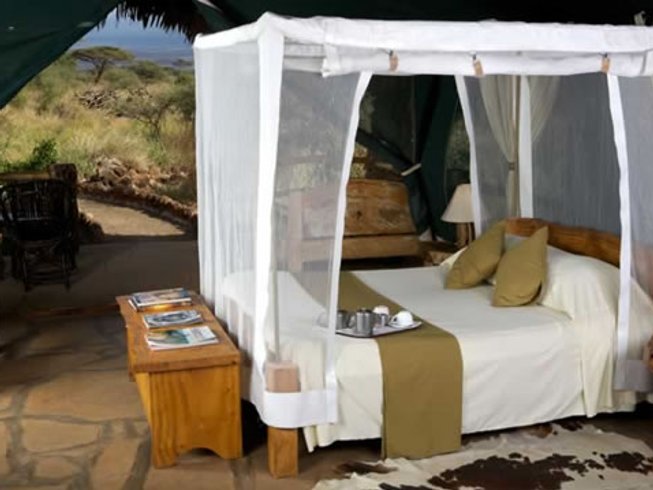 Login to save to your favorites
“Enjoy Kenyan wildlife in best places to stay!”
​
Photo
all media

Join Alibaba Tours and Safaris to get an amazing safari experience in Kenya. This safari will take you to see Kenyan wildlife in Tsavo West National Park and Amboseli National Park. One of your accommodations will be Salt Lick Game Lodge which is famous for its waterhole right below your room. This lodge provides unbelievably close yet safe access to see the animals as they drink. This will be a great opportunity for you who want to spend your time out in the African wilderness.

Sarova Salt Lick Game Lodge is situated in the midst of the Taita Hills Wildlife Sanctuary, a private wildlife conservancy of 28,000 acres at the foot of the Taita Hills bordering Tsavo West National Park. Sarova Salt Lick Game Lodge is raised on high stilts above watering holes and feeding pastures offering a spectacular view of the wildlife from above and all around.

At night, the waterholes are floodlit ensuring that you enjoy an uninterrupted view of the numerous animals arriving to quench their thirst. The elevated restaurant and the bar a level higher, also offer stunning views of the sanctuary and the ideal vantage points to view the game.

Activities to engage in while staying at the Sarova Salt Lick Game Lodge include game viewing, early morning and late afternoon game drives. The waterholes below provide a wonderful opportunity to view animals at close proximity in their natural habitat, an underground tunnel and bunker with ground-level windows provides unbelievably close yet safe access to a variety of animals as they drink.

Ngulia Safari Lodge has 52 rooms featuring bath and shower and a balcony with a view of the vast wilderness and floodlit water holes. Ngulia Safari Lodge’s main restaurant built in an open-air style and has a view of floodlit water holes and the Leopard dinning tree. The lodge’s Leopard view bar open in the evenings before the arrival of the leopard from the wilderness.

When in the heat, guests can swim in the lodge's pool. After the dark, the waterloo by the lodge is floodlit allowing guests to see the nocturnal animals coming in from the bush to quench their thirst including the elusive leopard. Game drives to Mzima Springs, Rhino Sanctuary and other parts of Tsavo West National Park.

Kibo Safari Camp is set at the foot of Mount Kilimanjaro which at 5,896 meters, is the highest freestanding mountain in the world and topped by one-fifth of all the ice in Africa in the famous Amboseli National Park, Kenya.

It means ‘salty dust" in Maa, the language of the Maasai, is a place of stark contrast. The park provides the classic Hollywood image of Africa. Set in rolling savannah scenery the park is dwarfed by the presence of the pink-tinged, snow-capped peak of Mount Kilimanjaro.

Kibo Safari Camp is a luxury tented camp situated within the Amboseli National Reserve. The Camp incorporates an open terraced restaurant and bar under acacia trees overlooking majestic Mount Kilimanjaro and a beautiful swimming pool has been landscaped within.

Each tent at the Kibo Safari Camp comes with a double bed or two single beds depending on your needs. There are also family tents that can take a maximum party of eight in comfort. There is also a small porch / veranda with seats and a coffee table. All tents are electrically lighted by power supplied from a generator on site.

At Kibo Safari Camp, the emphasis is placed on the experience of dining in the wild. Although meals are provided in a covered restaurant and drinks in a traditional bar, visitors are kept very close to the action by providing large, open areas with seats and tables on them. In this way, you are always right there in the wild.

After pick up from your Kenya coastal hotel / airport, you will drive to Salt Lick Game Sanctuary. The combined area of Tsavo East and West adjoined by a private sanctuary of Salt Lick. The many wonders of this harsh countryside include the red elephants, so called because of the red dust prevalent in the area. Another fascinating attraction is the Salt Lick Game Lodge which is built on stilts overlooking floodlit water holes where big herds of elephants, zebras, and buffalos come for water. Salt Lick Lodge allows you to view the game in the room as they come to drink from a waterhole in the compound.

After an early morning breakfast, you will check out of the Salt Lick Lodge and drive to Tsavo West National Park with game viewing en-route to Ngulia Safari Lodge for check-in and lunch. You will get an afternoon safari game drive which includes a visit to the Rhino Sanctuary for a chance to see the endangered black rhino among other wild animals of Tsavo West National Park. You will get dinner and overnight in Ngulia Safari Lodge.

You will get an early breakfast and game en-route to the Mzima Springs, whereby a clear crystal fresh water gushes out, home for the hippos, crocodiles, and freshwater fish, then you will drive to the Shetani Lava Flow to drive to Amboseli through the Maasai land. You will also get an afternoon game drive in this magnificent park with the view of Mount Kilimanjaro, enjoying the game viewing in the swamps and natural springs. You will overnight at Kibo Safari Camp or Ol Tukai Lodge.

You will get an early morning game drive in the park. This is also the ideal time to view the eternal snows of Mount Kilimanjaro (if the weather permitting). You will be back to the lodge for breakfast after which you will drive back to Mombasa, with lunch en route. You shall arrive at the beach hotel in the late afternoon.

Alibaba Tours and Safaris own a modern fleet of 4x4, custom-made Nissan fully equipped with HF radio communication system and open roof facilities (pop up roof) to enable you to enjoy photographic and game viewing expeditions. Their drivers are not only drivers but they are qualified and experienced driver / guides trained to reveal the beauty of the destination's wildlife, culture, and people.

Alibaba Tours and Safaris provides knowledgeable and professional driver / tour guides who know wildlife and animal behavior as well as the local fauna and flora. Their driver speaks English, French, and Spanish, other foreign language speaking guides / tour leaders are available upon request. A supplementary cost might be involved.

Alibaba Tours and Safaris looks forward to helping you turn your dream holiday into a reality and be part of this adventure family and remember your joy, happiness, and satisfaction is their call. They welcome you to Kenya to experience the breathtaking adventures of the majestic wildlife and look forward to sharing their knowledge and love of this extraordinary land.

Tsavo West National Park topography features a wide range of habitats, wildlife, and a young mountain scenery unique in Kenya, spectacular showcase of recent geological activities. With Mount Kilimanjaro sitting on its flank, this recent volcanic area abounds in hills / mountains (like the Chyulu or Ngulia Hills and Chaimu Crater), in lake / rivers / springs (Jipe Lake, Tsavo River and Mzima Springs) and other geological particularities such as lava flows (Shetani Flow), caves (Shetani Caves) and outcrops rock and ridges (Roaring Rocks). All these landmarks and nature treasures erupted millions of years after the energic shake-up of the earth of Tsavo.

Tsavo West National Park's landscape is dominated, especially off the hills by the giant baobab, a tree that is reputed to live a thousand years. After the rains, Tsavo West National Park is showered with white and pink ipomea, the morning glory family, and the acacia trees are festooned with feathery masses of white and pink blossom. The desert rose, somewhat like a miniature baobab, produces fuschia-pink flowers of striking beauty at almost any time of the year.

Amboseli National Park is located 240 kilometers south-east of Nairobi near the border with Tanzania on the northwestern foot of the mighty Mount Kilimanjaro. This park is best known for the excellent views of Mount Kilimanjaro. Amboseli National Park embodies five main wildlife habitats which are open plains, acacia woodland, rocky thorn bush country, swamps, and marshland.

Amboseli is a place of stark contrast. It means ‘salty dust’ in Maa, the language of the Maasai. Amboseli, despite its sometimes dry and dusty appearance, has an endless water supply filtered through thousands of feet of volcanic rock from Kilimanjaro's ice cap. Amboseli National Park covers 392 square kilometers and lies at the foot of Mount Kilimanjaro, Africa’s’ highest mountain.

One of the major attractions in Amboseli National Park is the snow-capped Mount Kilimanjaro, the highest mountain in Africa, then there is the Observation Hill which allows an overall view of the whole park especially the swamps and elephants. The swamp below observation hill hosts many elephants, buffaloes, hippos, and a variety of water fowls like pelican and Egyptian goose. Amboseli is home to the Maasai people so a village tour will open you up to the contemporary Maasai culture and indigenous lifestyle.