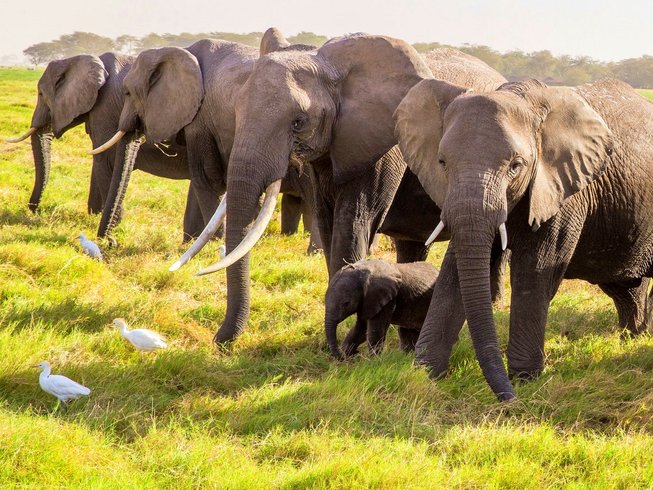 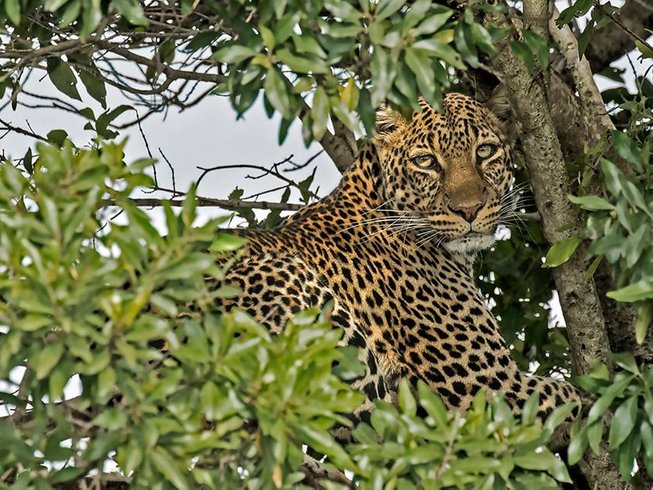 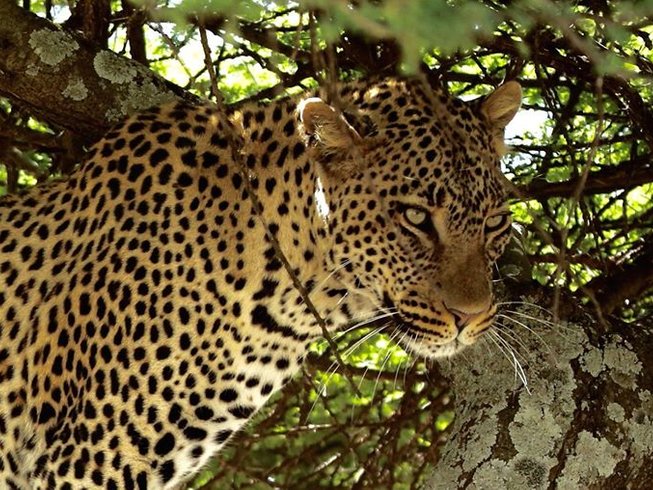 Login to save to your favorites
“Your true adventures with the local Tanzanian!”
​
Photo
all media

Your tour takes you through the Lake Manyara National Park, Small Park is famously known for its tree-climbing lions. Enjoy the magnificent view of the Rift Valley, landscape, and the vegetation is very nice, you will then visit the Ngorongoro crater-this is a wonderful place and it is indeed the natural wonder as awarded. You will see nice views from the viewing point and have a chance to almost see the big five.

Here you have the opportunity to see lion, leopard, cheetah, rhino, and a host of other game species, an abundance of birds around the alkaline lake below the crater, and much more beautiful fauna and flora the crater has to offer. This is a short tour, worth your time and your budget, and will thrill your wildlife thirst. Chances to see the big five is great, and you also get to see colors of the many cultures Tanzania have, the tribes such as the Maasai, Hadzabe, Datoga are some of the main authentic cultural highlights that you can opt to incorporate into your tour. Enjoy!

Leave Arusha at 7:30 a.m. You will leave with packed lunch and mineral water, drive to Serengeti National Park, en-route game drive, the drive towards Seronera area where animals such as leopard, prides of lion, packs of spotted hyenas, the fleetest cheetahs, and many plain animals like buffaloes, topi, hartebeest, wildebeest, waterbucks, elands, zebras, gazelles, warthogs, just to name a few, and numerous number of birds can be seen. Continue to your accommodation for dinner and a good night.

Enjoy Full day in the Central Serengeti National Park, Seronera is one of many world-famous attractions in the Central Serengeti. Seronera Valley supports a much greater diversity of resident wildlife than anywhere else in the Serengeti including elephant, giraffe, impala, waterbuck, hippo, topi, reedbuck, buffalo, and baboon. This resident prey in turn attracts the highest concentrations of large predators in Africa (lion, hyena, leopard, and cheetah) and a multitude of smaller predators (mongoose, jackal, serval, and bat-eared fox)

Wake up for breakfast and then at around 7:30 a.m. start driving to the Ngorongoro crater floor. You will leave with a packed lunch. Formal registrations in this magnificent landscape-Ngorongoro gate. Afterward, start entering the crater floor and drive towards the descending route-stop at the viewpoint and have a perfect view of the crater, The Ngorongoro Crater is the largest, unbroken, and unflooded caldera in the world and it has an unbelievable diversity of wildlife. In addition to zebras and wildebeests, you might also spot the rare black rhino and other members of the Big Five. The crater is also home to other animals such as hyenas, waterbucks, bushbucks, eland, and more than 500 bird species. After picnic lunch continues with a game drive until late afternoon, then you will ascend the crater and drive to your accommodation for dinner and overnight.

Wake up in the morning for breakfast, after breakfast starts driving to Lake Manyara National Park. The park encompasses the northwest bank and part of the alkaline Lake Manyara which itself rests in the Great Rift Valley. The park is perhaps best known for its flamingos, pelicans, and cormorants but it is also the home for a few hundred other species of birds; it is, therefore, a paradise for ornithologists. Next to a great variety of birds, the “Big Game” can also be seen. With a bit of luck, you might see elephants in the wooded regions and with even more fortune the tree-climbing lions. Baboons and vervet monkeys are also found amongst the forested areas and in the more open spaces, giraffes nibble at the fresh leaves while the various types of antelopes common to the region browse for tasty shoots. After a picnic lunch, there will be more time for further game and wildlife watching before it is time to exit the park and drive Arusha to your preferred Hotel.

Located on the way to Ngorongoro Crater and the Serengeti, Lake Manyara National Park is worth a stop in its own right. Its groundwater forests, bush plains, baobab strewn cliffs, and algae-streaked hot springs offer incredible ecological variety in a small area, rich in wildlife and incredible numbers of birds.

The alkaline soda of Lake Manyara is home to an incredible array of birdlife that thrives on its brackish waters. Pink flamingo stoop and graze by the thousands colourful specks against the grey minerals of the lake shore. Yellow-billed storks swoop and corkscrew on thermal winds rising up from the escarpment, and herons flap their wings against the sun-drenched sky. Even reluctant bird-watchers will find something to watch and marvel at within the national park.

Lake Manyara’s famous tree-climbing lions are another reason to pay a visit to this park. The only kind of their species in the world, they make the ancient mahogany and elegant acacias their home during the rainy season and are a well-known but rather a rare feature of the northern park. In addition to the lions, the national park is also home to the largest concentration of baboons anywhere in the world — a fact that accounts for interesting game viewing of large families of the primates.

Stretching for 50 kilometers along the base of the rusty-gold 600-meter high Rift Valley escarpment, Lake Manyara is a scenic gem, with a setting extolled by Ernest Hemingway as “the loveliest I had seen in Africa”.The compact game-viewing circuit through Manyara offers a virtual microcosm of the Tanzanian safari experience.

From the entrance gate, the road winds through an expanse of lush jungle-like groundwater forest where hundred-strong baboon troops lounge nonchalantly along the roadside; the blue monkeys scamper nimbly between the ancient mahogany trees; dainty bushbuck tread warily through the shadows, and the outsized forest hornbills honk cacophonously in the high canopy.

In contrast with the intimacy of the forest, is the grassy floodplain and its expansive views eastward, across the alkaline lake, to the jagged blue volcanic peaks that rise from the endless Maasai Steppes. Large buffalo, wildebeest and zebra herds congregate on these grassy plains, and so do the giraffes – some so dark in coloration that they appear to be black from a distance.

Inland of the floodplain, a narrow belt of acacia woodland is the favored haunt of Manyara’s legendary tree-climbing lions and impressively tusked elephants. Squadrons of banded mongoose dart between the acacias, whereas the diminutive Kirk’s dik-dik forages in their shade. Pairs of klipspringer are often seen silhouetted on the rocks above a field of searing hot springs that steams and bubbles adjacent to the lakeshore in the far south of the park.

Manyara provides the perfect introduction to Tanzania’s birdlife. More than 400 species have been recorded, and even a first-time visitor to Africa might reasonably expect to observe 100 of these in one day. Highlights include thousands of pink-hued flamingos on their perpetual migration, as well as other large water birds such as pelicans, cormorants, and storks.

The Serengeti National Park in Tanzania was established in 1952. It is home to the greatest wildlife spectacle on earth – the great migration of wildebeest and zebra. The resident population of lion, cheetah, elephant, giraffe, and birds is also impressive. There’s a wide variety of accommodation available, from luxury lodges to mobile camps. The park covers 5,700 square miles, (14,763 square kilometers), it’s larger than Connecticut, with at most a couple hundred vehicles driving around.

The Park can be divided into three sections. The popular southern/central part (Seronera Valley), is what the Maasai called the “serengit”, the land of endless plains. It’s classic savannah, dotted with acacias and filled with wildlife. The western corridor is marked by the Grumeti River, and has more forests and dense bush. The north, Lobo area, meets up with Kenya’s Masai Mara Reserve, is the least visited section.

Two World Heritage Sites and two Biosphere Reserves have been established within the 30,000 kilometers² regions. Its unique ecosystem has inspired writers from Ernest Hemingway to Peter Mattheissen, filmakers like Hugo von Lawick and Alan Root as well as numerous photographers and scientists – many of which have put their works at our disposal to create this website.

The Serengeti ecosystem is one of the oldest on earth. The essential features of climate, vegetation and fauna have barely changed in the past million years. Early man himself made an appearance in Olduvai Gorge about two million years ago. Some patterns of life, death, adaptation, and migration are as old as the hills themselves.

It is the migration for which Serengeti is perhaps most famous. Over a million wildebeest and about 200,000 zebras flow south from the northern hills to the southern plains for the short rains every October and November, and then swirl west and north after the long rains in April, May and June. So strong is the ancient instinct to move that no drought, gorge or crocodile infested river can hold them back.

Three daily meals are included every day, except for the last day when the meals are not included.

Transfer available for additional US$30 per person