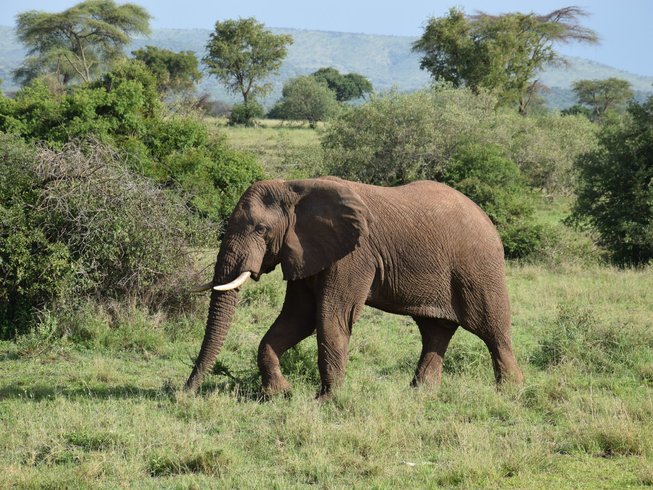 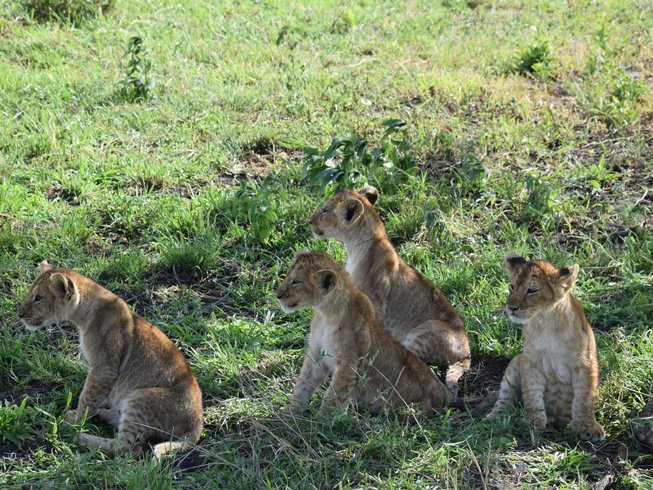 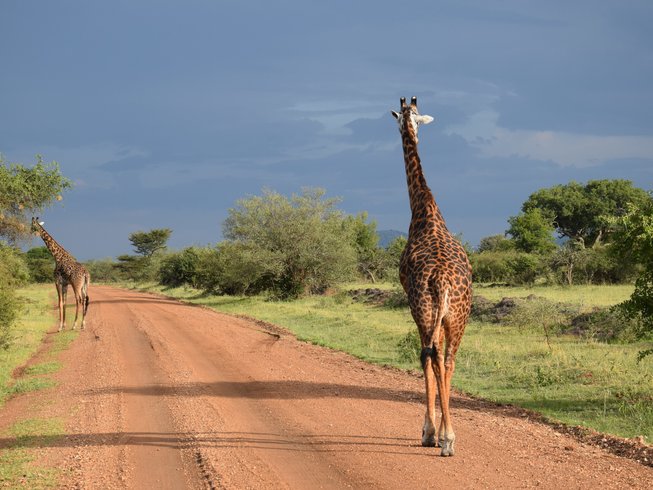 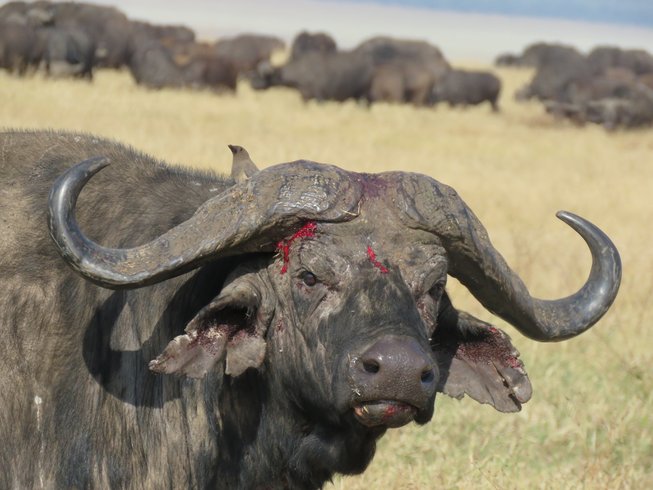 Besides Tarangire National Park, Lake Manyara National Park, Serengeti, Olduvai Gorge and Ngorongoro Crater, this safari includes a day at the surreal soda Lake Natron. This lake is the only breeding area for 2.5 million lesser flamingoes that live in the valley because its caustic environment is a barrier against predators trying to reach their nests. Walks around the lake, streams, and waterfalls along the nearby escarpment make a fantastic adventure off the beaten track.

During your 7 days Tanzania great migration highlights you will be accommodated in the follows accommodations;

In the morning after breakfast in your hotel in Arusha or pickup in Kilimanjaro Airport stop in Arusha for breakfast afterward take 2hrs drive to Tarangire National Park. Take a full day drive in this spectacular park in the dry season when many of the migratory wildlife species come back to the permanent waters of the Tarangire River. Huge herds of wildebeest, zebras, elephants, elands, and Oryx gather to stay in Tarangire.

In the evening arrive at the camp or lodge in Mto wa Mbu for dinner and overnight.

After breakfast, drive to Lake Natron, has a number of activities that are very easily combined with walks in the middle of the day there is the nearby Ngare Sero gorge that you can walk to options of long hikes to the source or shorter hikes to waterfalls.

After breakfast pack all staffs and start driving to Lake Manyara National Park, arrive at lunch time, eat your packed lunch afterward proceed with the game viewing in Lake Manyara famous for tree climbing Lion and bird species in Lake Manyara. Arrive on evening at the lodge or camp for dinner and overnight

After breakfast leave the lodge with picnic lunch and drive to Serengeti National Park from Manyara via Olduvai Gorge takes 3hrs. Olduvai Gorge is an archaeological site located in Ngorongoro, in which early human fossils were first discovered. Afterward it’s an optional to visit Maasai village on the way to Serengeti.

Then in the late evening, drive to and overnight at the camp or lodge in Seronera central Serengeti.

After breakfast, venture into the Serengeti’s wilderness corners for a full day of game viewing in the park. With a picnic lunch beside you, on the evening drive back to the camp or lodge for dinner and overnight.

Wake up with early morning game viewing followed with sunrise till 8:30am drive back to the camp/ lodge for breakfast then arrange all staffs ready to check out and drive to Ngorongoro while on game drive in Serengeti en route to Ngorongoro. Arrival in Ngorongoro on late afternoon, check in at the camp or lodge then get your safe prepared for the walking around the Ngorongoro Crater rim till evening, arrive at the camp for dinner and overnight.

Day 7: Decent the Ngorongoro Crater then drive to Arusha

On early morning after breakfast leave the lodge with all staffs beside the picnic lunch for a game drive inside the crater. This is the best place in Tanzania to see black rhino as well as the pride of lions that include the magnificent black-maned males. There are lots of colorful flamingos and a variety of water birds. Other game that you can see includes elephant, buffalo hyena other members of the antelope family. After lunch time start driving to ascent the crater and drive 3hrs straight to Arusha drop off at the hotel or catching evening flight in Kilimanjaro International Airport (JRO) end of safari.

The safari fleet is made up of specially customized 4×4 Toyota Land Cruisers. Each car is equipped with:

African Diurnal Safaris has the most experienced guides who have been at traveling and sighting places almost all their lives. They are experienced wanderers. They know what’s where. Who is where, and what’s what. Writing this, we fall short of saying, they are know-it-alls of wildlife and travel.

The Serengeti is one of the largest wildlife sanctuaries in the world covering an area of 14,763 square kilometers. The spectacular concentration of plain animals found nowhere in the worlds and the annual wildebeest migration.

Apart from the wildebeests and zebras, you can expect to see a large variety of animals; gazelles and hippos will be found there at any time of the year. Elephants will be frequently seen, but the population is migratory. The Serengeti predators made famous by many films and documentaries include lion, leopard, cheetah, and hyena.

The birds of the Serengeti are just as spectacular and varied as the animals. There are several types of eagles and vultures, ostrich, secretary birds, kori bustards, hornbills as well as a host of small birds. There are almost 500 species of birds recorded in the parks.

Ngorongoro Conservation Area (crater) is a world-famous geographic feature. It is technically called a “caldera”, which is a collapsed volcano. The floor covers an area of over 102 square miles which includes a soda lake and forms a perfectly preserved and self-contained habitat for a large number and variety of animal species such as elephants, buffaloes, hippos, and many other species can generally be seen here at any time of year.

Maasai tribesmen traditionally graze night, and they may be seen in their distinctive dress, tending to their herds of cattle. The animals are not trapped in the crater. There is some migratory movement, but because of the protected nature of the habitat and the availability of grazing and water, many of the animal population remains resident year around. This makes Ngorongoro ideal for game viewing. There are several feelings of pride of lions and some of the last surviving to be found in Tanzania.

The lodges and campsites are situated around the rim of the crater. This makes the clients view the crater all the time while in a lodge or campsite.

This is one of the most popular and attractive wildlife sanctuaries in East Africa beneath the Great Rift Valley. It is home to baboons, blue monkeys, buffalo, giraffe, elephant, hippos and so many more. Over 300 species of birds are found here.

The park consists of 350 square kilometers, 120 square miles of land during the wet season but is nearly non-existent during the dry seasons. The park is also famous for the flamingos that habit the lake.

One of the outstanding features of Tarangire is the vast number of enormous baobab trees. These giants also known as the upside-down tree, are a strange and beautiful sight in themselves. Tarangire is located in Manyara Region, the name of the park originated from the Tarangire river that crosses through the park, being the only source of water for the wild animal during the dry season.

During the dry season, thousands of animals migrate to the Tarangire National Park from Manyara. The park is very famous for its massive number of elephants, baobab trees and lions climbing trees.

Lake Natron is located in northern Tanzania close to the Kenyan border in the eastern branch of African’s Great Rift Valley. This lake supports an expected 2.5 million birds as their only breeding ground. This spectacle is a sight to behold hundreds of thousands of fabulously pink head flamingos come to feed blue-green algae on the lake.

The size of the lake is about 260 square. The major attraction here is a salt lake, large flamingo populations, Oldoinyo Lengai, Engaruka rains, Engare Sero waterfalls.

The name Oldoinyo Lengai means “the mountain of God” in the Maasai language of the native people. The volcano is the only active volcano in the part of the Rift Valley and is often referred to as the strangest volcano on earth. The primary activity is only trekking.

Special dietary requirements can be requested. Please send an inquiry for more details.

Optional activities such as visiting Maasai village, Balloon Safari in Serengeti Plains and Hiking Oldoinyo Lengai Mountain are available for an extra charges, please let us know during your booking or reservation.

The spa treatment is available on request upon arrival on your accommodation with an extra cost.

Please book your flight to arrive at Kilimanjaro International Airport (JRO). Transfer from and to this airport is included. African Diurnal Safaris' representative will pick you up at the airport.

You will be dropped off at Kilimanjaro International Airport (JRO) for departure.