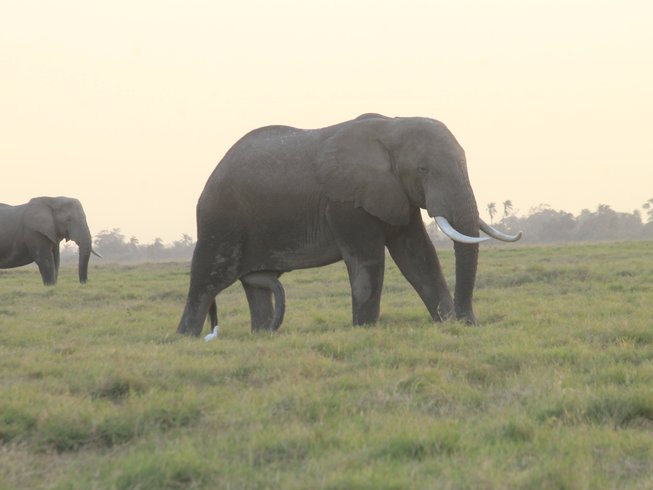 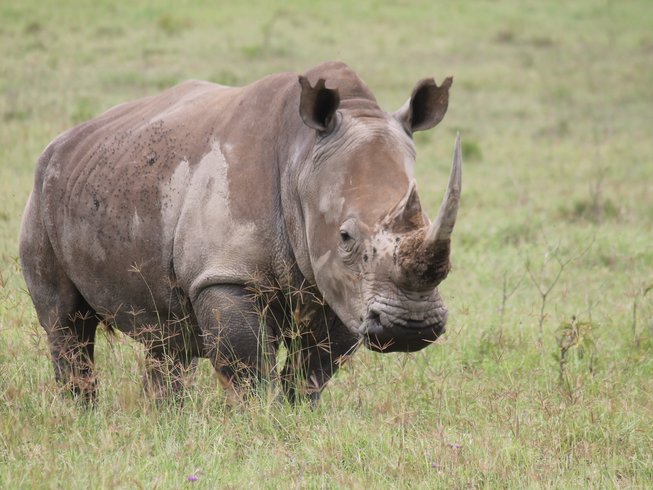 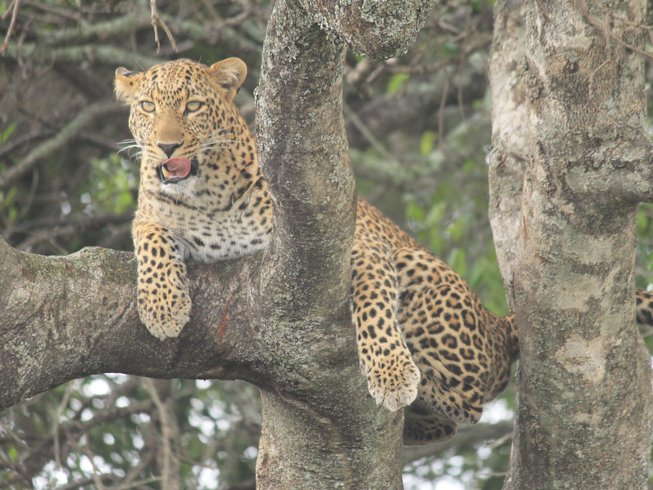 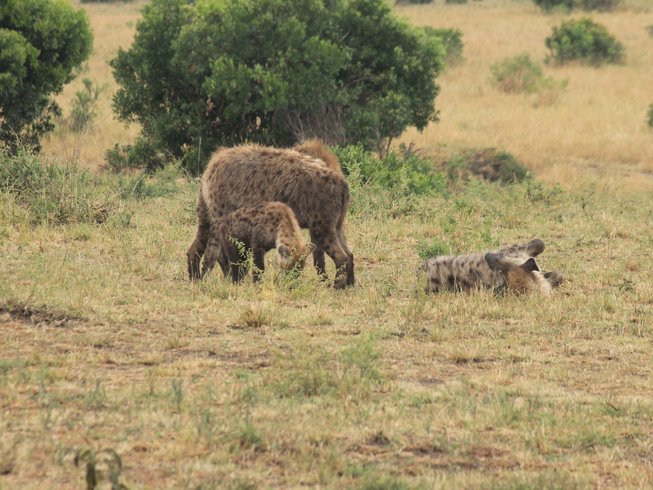 The safari covers the famous Lake Nakuru Reserve, you will drive through the floor of the Great Rift Valley with amazing scenery. You will spend two nights at the famous Masai Mara plains in a luxury camp as well as in a luxury lodge at Lake Nakuru. You will have unlimited game drives in a 4x4 private safari Landcruiser.

Sarova Lion Hill Game Lodge is cleverly laid out in such a way that most rooms and sitting areas afford stunning views of the lake and the park. The lodge incorporates natural landscaping with tall acacia trees, winding walkways, and greens dotted with bird feeds.

Mara Sarova camp is a luxury camp located inside the Masai Mara reserve. The rolling plains around the camp usually teem up with wildebeest, gazelles, and zebras during the migration months, and the camp is situated right in the center of their migration path. A wildlife safari puts you right in the middle of all this action. Get a first-hand account of this epic phenomenon and live to tell the tale.

A safari also helps you acquaint yourself with the landscapes of this beautiful African setting. By virtue of its location and layout, the camp offers an unparalleled plethora of activities and experiences from luxury tented living to bird-watching, mini golf, sport fishing, and a unique insight into the Maasai culture at the adjoining Maasai village.

You will be picked up from your hotel or at the airport after breakfast and depart for Lake Nakuru, stopping en route at the Great Rift Valley viewpoint for amazing views. Drive further through the floor of the Great Rift Valley to arrive at your camp in time for lunch. Lake Nakuru National Park is the pink lake, due to flamingo flocks, you will have a close view of the white rhino which gather in front of the yellow-backed acacia forests at the southern part of the lake.

Other park resident animals include leopards, buffaloes, and hippos. The park is best explored in the golden sun of the late afternoon. You can circle the lake clockwise in your car, then drive to the top of Baboon Cliff for a stunning sunset view. In the afternoon, enjoy your first glimpse of the lake's fabled 1.2 million flamingos and perhaps find rhinos grazing on the lakeshore (this park is the nation's largest rhino sanctuary), drive back to your camp in time for a swim and a sumptuous buffet supper.

After breakfast, depart for the Masai Mara with a game drive en-route. You'll arrive in time for lunch. Have a leisurely afternoon before enjoying a scheduled evening game drive. The Maasai Mara Reserve is the most popular reserve known for the big skies, open savannah, as featured in the film ''Out of Africa''.

It is also accorded the status of the seventh wonder of the world because of the annual wildebeest migration, where over 2 million of wildebeests cross from the Serengeti to the Mara. Besides these, the reserve boasts of the ''big five'' (elephant, rhino, buffalo, lion, and leopard) plus plenty of plain wild animals that include zebra, giraffe, impala, topi, giraffe, Thomson's gazelle, hyenas, cheetah, jackal, bat-eared foxes, and birdlife. No wonder it is the shooting sight for BBC's "Big Cat Diary" every year.

Today, you will do a full day's safari in one of the world's most famous reserves. Maasai Mara offers an abundance of herbivores, this makes the ideal hunting ground for Kenya's famous "big cats" and hosts her largest population of lions. Historically teeming with wildlife, the Mara is famous for the large herds of elephant and buffalo that wander its plains and for the annual migration of the wildebeest

Enjoy an early morning game drive. Return for breakfast and later drive back to Nairobi, descend down to the Great Rift Valley, stopping at the Great Rift Valley viewpoint to arrive at Nairobi in the early afternoon. You will be dropped at your hotel or at the airport for your onward arrangements at the end of your safari.

For many people, Maasai Mara is incomparably the most breathtaking of all country’s game reserves, perhaps of all Africa. The Maasai Mara National Reserve also known as The Mara by the locals is a huge game reserve in Narok County, an extension of Tanzania’s National Park. Maasai Mara is named in respect and in honor of the Maasai people (the ancestral inhabitants of the area) and their description of the area when looked at from afar: "Mara," which is Maa (Maasai language) for "spotted," an apt description for the circles of trees, scrub, savanna, and cloud shadows that mark the area.

Although often described as the greatest of nature’s stages, the Mara adds up to less than four percent of the whole Serengeti ecosystem. In yesteryear when the annual wildebeest migration was at its peak, the reserve held almost 2.5 million large herbivores together with smaller species: 1.4 million wildebeest, 550,00 gazelles, 200,000 Zebra, 62,000 buffalo, 64,100 impala, 61,200 topi, 7,500 hartebeest, 7,100 giraffe, 3,000 eland, and 4,000 elephant plus uncounted antelope such as dik-dik, duiker, steenbok, Rhino, warthog, and bushpig. Besides, there were big cats: lion, leopard, and cheetah.

All these creatures flock into the Mara open grasslands for three to four months during the Great Migration from July to October. Maasai Mara is only a fraction of the greater Mara ecosystem, which includes several group ranches namely Koiyaki, Olkinyei, Siana, Lamek, Ol Chorro Oirowua, Oloirien, Kerinkani, Ol Derkesi, Naikara, Maji Moto, and Kimintet.

About 156 kilometers northwest of Kenya's capital Nairobi lies Lake Nakuru National Park. At 1,754 meters above the sea level, the lake is one of the most famous Great Rift Valley soda lakes. The 188-square kilometer scenic lake is one of Kenya's most popular parks. It treats visitors to varied ecological diversity consisting of pockets of acacia woodland, a waterfall, bushy grassland, and rugged rocky escarpments.

Lake Nakuru National Park was the go-to destination for a colorful view of lesser and greater flamingoes. This was until 2012 when floods got rid of most of the algae that the birds depended on. Since then, most of the flamingos migrated to the nearby Great Rift Valley lakes, notably Lake Bogoria. You will still see hundreds of thousands of pelicans and flamingos. The lake was most renowned for its exquisite birding but wildlife viewing cannot be ruled out. Save for the elephant, all the other bug safari animals are easy to see.

Daily meals, as well as unlimited drinking water during the safari, are included.

Please arrange your flight to arrive at Jomo Kenyatta International Airport (NBO). Transfers are included, Africa Celebrity Tours will pick you up from the airport.