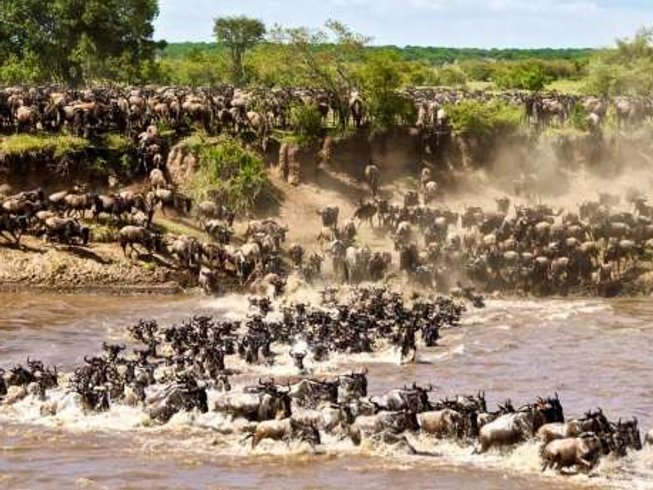 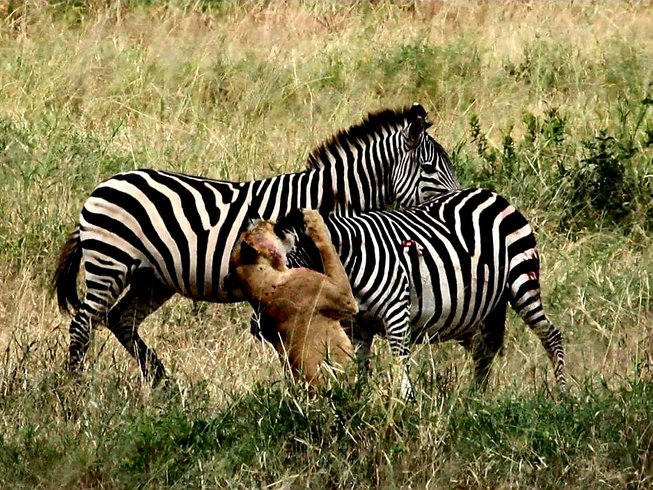 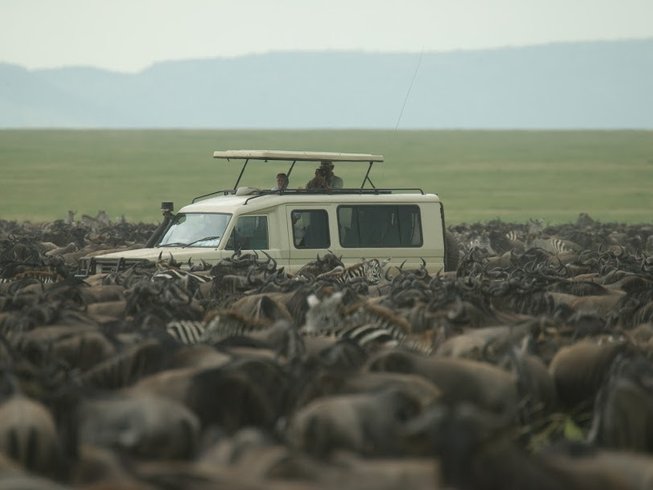 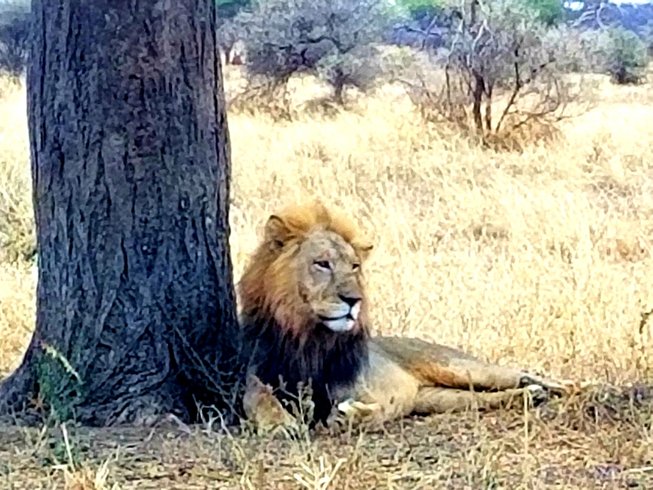 Login to save to your favorites
“Amazing wildebeests Migration Safari.”
​
Photo
all media

If you want to see the largest herd movement of animals on the planet and also visit the best national parks in northern Tanzania, this is the perfect itinerary for you. The focus during this trip will be on the Serengeti, where the Great Migration cross the Grumeti River from May to July and Mara River from July to October. The herds of wildebeest and zebra must outsmart the huge Nile crocodiles and fast-flowing water before facing predators waiting on the other side. An amazing spectacle!

Arrive at Kilimanjaro International Airport (JRO). You will then be driven to Palace Hotel in Arusha for all meals and accommodation. Overnight stay in Arusha Kibo Palace Hotel on a full board basis.

Depart in the morning for Lake Manyara National Park with picnic lunch. On arrival, enter the park for game viewing. The afternoon continues in the Karatu area, arriving at your lodge for dinner and overnight stay at Karatu Country Lodge on a full board basis.

After breakfast, depart for Serengeti National Park with picnic lunch. Leaving Karatu behind, you will arrive at Ngorongoro Conservation Area. From here, you will be in awe at the vast plains of the Serengeti where you'll begin spotting wildlife as you approach the entrance gate. Complete the formalities and enter the park with game viewing en route to the lodge, arriving for dinner and overnight stay at Mabalageti Tented Lodge or Mbugani Camp (depending which month you're coming) on a full board basis.

You will participate in the scheduled morning and afternoon shared game drives in Serengeti National Park with meals and overnight at the camp. Dinner and overnight stay at Mbalageti Tented Lodge or Mbugani Camp on a full board basis.

After breakfast, you will depart for Karatu Country Lodge with a picnic lunch viewing game across the vast Serengeti plains, stopping en route for picnic lunch. You will visit a Maasai Village and then continue to your lodge for dinner and overnight stay at Karatu Tloma Lodge on full board basis.

A highlight awaits you this morning as you depart your lodge with picnic lunch to explore what is commonly referred to as the world’s largest wildlife zoo. After breakfast, you will descent through the early morning mists and 2,000 feet into the crater. Ngorongoro Crater is the world’s largest intact volcanic caldera. Due to its size and diversity, the crater floor is comprised of several distinct areas ranging from forest, swamps, lakes, and springs, to open grassland and some sandy dunes. It’s an awesome wildlife experience.

You will visit a Masai village on the sixth day of safari.

Stretching for 50 kilometers along the base of the rusty gold 600-meter high Rift Valley escarpment, Lake Manyara is a scenic gem, with a setting extolled by Ernest Hemingway as “the loveliest I had seen in Africa”. The compact game-viewing circuit through Manyara offers a virtual microcosm of the Tanzanian safari experience.

Contrasting with the intimacy of the forest is the grassy floodplain and its expansive views eastward, across the alkaline lake, to the jagged blue volcanic peaks that rise from the endless Maasai Steppes. Large buffalo, wildebeest and zebra herds congregate on these grassy plains, as do giraffes – some so dark in coloration that they appear to be black from a distance.

Inland of the floodplain, a narrow belt of acacia woodland is the favored haunt of Manyara’s legendary tree-climbing lions and impressively tusked elephants. Squadrons of banded mongoose dart between the acacias, while the diminutive Kirk’s dik-dik forages in their shade. Pairs of klipspringer are often seen silhouetted on the rocks above a field of searing hot springs that steams and bubbles adjacent to the lakeshore in the far south of the park.

Manyara provides the perfect introduction to Tanzania’s birdlife. More than 400 species have been recorded, and even a first-time visitor to Africa might reasonably expect to observe 100 of these in one day. Highlights include thousands of pink-hued flamingos on their perpetual migration, as well as other large waterbirds such as pelicans, cormorants, and storks.

Tanzania’s oldest and most popular national park, also a world heritage site and recently proclaimed a 7th Worldwide Wonder, the Serengeti is famed for its annual migration, when some six million hooves pound the open plains, as more than 200,000 zebra and 300,000 Thomson’s gazelle join the wildebeest’s trek for fresh grazing. Yet even when the migration is quiet, the Serengeti offers arguably the most scintillating game-viewing in Africa: great herds of buffalo, smaller groups of elephant and giraffe, and thousands upon thousands of eland, topi, kongoni, impala and Grant’s gazelle.

The spectacle of predator versus prey dominates Tanzania’s greatest park. Golden-maned lion prides feast on the abundance of plain grazers. Solitary leopards haunt the acacia trees lining the Seronera River, while a high density of cheetahs prowls the southeastern plains. Almost uniquely, all three African jackal species occur here, alongside the spotted hyena and a host of more elusive small predators, ranging from the insectivorous aardwolf to the beautiful serval cat.

But there is more to Serengeti than large mammals. Gaudy agama lizards and rock hyraxes scuffle around the surfaces of the park’s isolated granite koppies. A full 100 varieties of dung beetle have been recorded, as have 500-plus bird species, ranging from the outsized ostrich and bizarre secretary bird of the open grassland to the black eagles that soar effortlessly above the Lobo Hills.

Popular the Serengeti might be, but it remains so vast that you may be the only human audience when a pride of lions masterminds a siege, focused unswervingly on its next meal.

The Ngorongoro Crater – the name has an almost mystical ring to it, conjuring images of a giant wildlife-filled volcanic caldera, where the big five and many other animals roam. But there’s even more – the Ngorongoro Conservation Area also encompasses mountains, lakes, forests, and wide-open African plains!

With the world-famous crater at its heart, the Ngorongoro Conservation Area covers an area of 8300 square kilometers. This African wildlife area was previously part of the Serengeti National Park, but due to the grazing needs of the animals of the local Masai, the area was reclassified as an African wildlife conservation area in Tanzania.

The Ngorongoro Conservation Area as a whole has much to offer but the jewel in its crown is, without a doubt, the eponymous crater – an area of 265 square kilometers, which is 610 meters deep and 19 kilometers across. The rim of the crater is an astounding 2286 meters above sea level. The floor contains a small soda lake, called Lake Magadi and it is estimated that 30 000 animals are living in the crater, making it the most intensive safari game viewing area on earth!

It was therefore very fittingly declared a World Heritage Site in 1978. A visit to Tanzania is simply incomplete without a safari visit to the park. Please refer to the map below for further details, pictures, photos images and information on this magnificent and picturesque park.

Your daily breakfast, lunch, and dinner are included in the price, as mentioned in the itinerary. You will also be provided with one bottle of mineral water per person per day during game drives.

On day seventh day of the tour, you have the option to go on a city tour of Arusha.